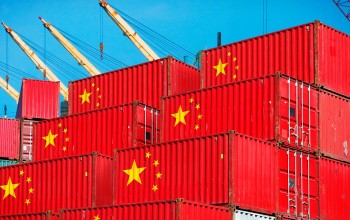 This marks an increase of 21.8 per cent from the pre-epidemic level in 2019, the General Administration of Customs (GAC) said.

Exports jumped 33.8 per cent from a year earlier while imports climbed 22.7 per cent in yuan terms.

The trade surplus increased 149.7 per cent to reach 1.02 trillion yuan in the January-April period.

The country’s imports and exports totalled 3.15 trillion yuan in April alone. This marks a year-on-year increase of 26.6 per cent and month-on-month growth of 4.2 per cent.

In April, the trade surplus narrowed 12.4 per cent from a year earlier to 276.5 billion yuan.

In the first four months, the Association of Southeast Asian Nations remained China’s largest trading partner, followed by the European Union and the United States, the GAC data showed.

During the period, the growth rates of China’s trade value with the three trading partners are 27.6 per cent, 32.1 per cent and 50.3 per cent, respectively.

China’s trade with countries along the Belt and Road rose 24.8 per cent year on year to reach 3.43 trillion yuan.

Private enterprises contributed 47.2 per cent of China’s total foreign trade in the first four months, up 4.1 percentage points from a year earlier.

Their imports and exports expanded by 40.8 per cent to 5.48 trillion yuan during the period.