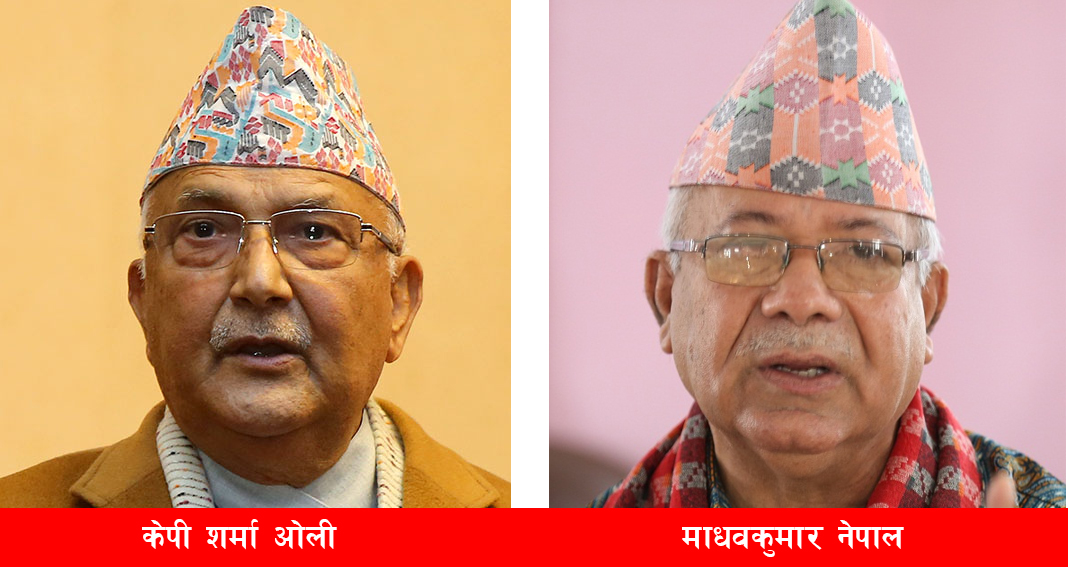 Kathmandu, May 13: Talks held between CPN-UML Chairman KP Sharma Oli and senior leader Madhav Kumar Nepal ended in a positive note, thereby averting an imminent split in the party. At the meeting held in Budhanilakantha, the two leaders agreed to resolve the differences through the formation of a task force.

Talking to media persons following the meeting, leader Nepal said deliberations will continue to withdraw the Falgun 28 decision and take the party back to the state of 2075 Jestha 2. “We are now headed towards a solution. A task force will be formed and things will be decided based on consensus,” he said.

It may be noted that the Madhav Nepal-led faction MPs had decided to resign from their post to pave the way for the opposition parties to form the next government.

Prior to this, the UML Standing Committee meeting this morning had decided to withdraw the suspension on leaders Nepal, Bhim Bahadur Rawal, Ghanashyam Bhusal and Surendra Prasad Pandey. UML Chair was also given the authority to take appropriate decisions by holding discussion to resolve the differences in the party.

The deadline of the President inviting political parties to form a majority government following the PM and the party chair having lost a vote of confidence in the House of Representatives is ending tonight at 9 pm.

The party disputes took a new turn after 28 party lawmakers including Nepal were absent in the special HoR session on May 10.

Differences among the top leadership have deepened following the reinstatement of the HoR and the cancellation of the unification of the UML and Maoist Centre. Following the dispute, leader Nepal and Jhalanath Khanal faction of the party had been carrying parallel activities of the party while blaming other side for the problems.

The party had taken action against five members of the Province Assembly of Karnali Province including Prakash Jwala for giving a vote of confidence to the province chief minister Mahendra Bahadur Shahi against party’s whip.