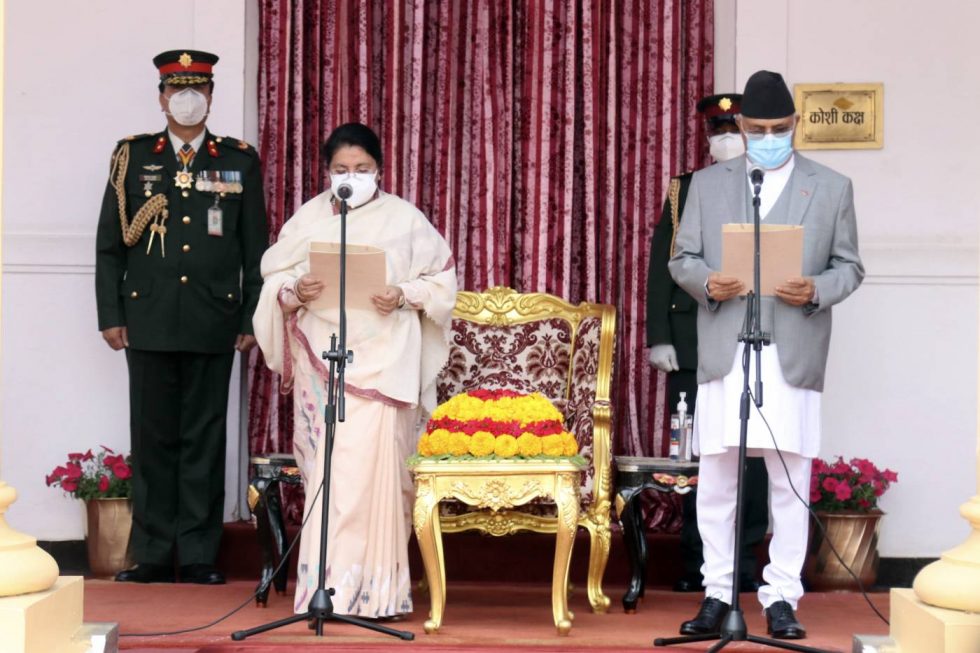 The CPN (UML) parliamentary party leader Oli has been appointed to the post of Prime Minister in accordance with Article 76(3) of the Constitution. The CPN (UML) is the largest party in the House of Representatives, the lower house of the Federal Parliament.

Present in the swearing-in ceremony were the Vice President Nanda Bahadur Pun, the Chief Justice Cholendra Shumsher JBR, the Speaker of the House of Representatives Agni Prasad Sapkota, the National Assembly Chair Ganesh Prasad Timilsina, the heads of constitutional bodies, among the dignitaries.

The President had, on May 10, called upon the member of the House of Representatives (HoR), who can garner majority votes with the support of two or more than two parties representing in the HoR, to stake claim for the new Prime Minister as per Article 76 (2) of the Constitution, giving a three days’ deadline until 9pm Thursday.

However, the opposition parties, including the main opposition party Nepali Congress and the CPN (Maoist Centre), had failed to stake a claim for the post of Prime Minister within the deadline.

The President had reappointed Oli, the leader of the largest party in the Parliament, to the post of Prime Minister on Thursday night. This is Prime Minister Oli’s third stint as the Executive Chief.

PM Oli forayed into politics with his involvement in the movement against the Panchayat regime and is active in politics for more than three decades.

The CPN (UML) Chairman Oli, who is active in the leftist politics starting from the Jhapa Uprising (1970) against the autocratic Panchayat system, became the Prime Minister on October 11, 2015 for the first time after the promulgation of the present Constitution and on February 15, 2018 following the last general elections.

An accomplished orator and studious leader, Oli has long experience of prison life in course of the struggle for democracy. He was born of Mohan Prasad and Madhu (mother) on February 22, 1952, in Iwa-2 of Tehrathum district.

The Oli family then migrated to Sharanamati-6, Jhapa district and PM Oli was involved in politics from then onwards.

One of the prominient leaders of the Jhapa Uprising, Oli has unflinching stance for development, prosperity, democracy, durable peace, social goodwill and national integration.

The national motto of ‘Prosperous Nepal, Happy Nepali’ was determined during Oli’s second term as the Prime Minister and planned development endeavours were initiated in the infrastructure and social sectors in the country.

The UML Chair is also considered a vocal and strong leader on issues of national unity and nationalism.