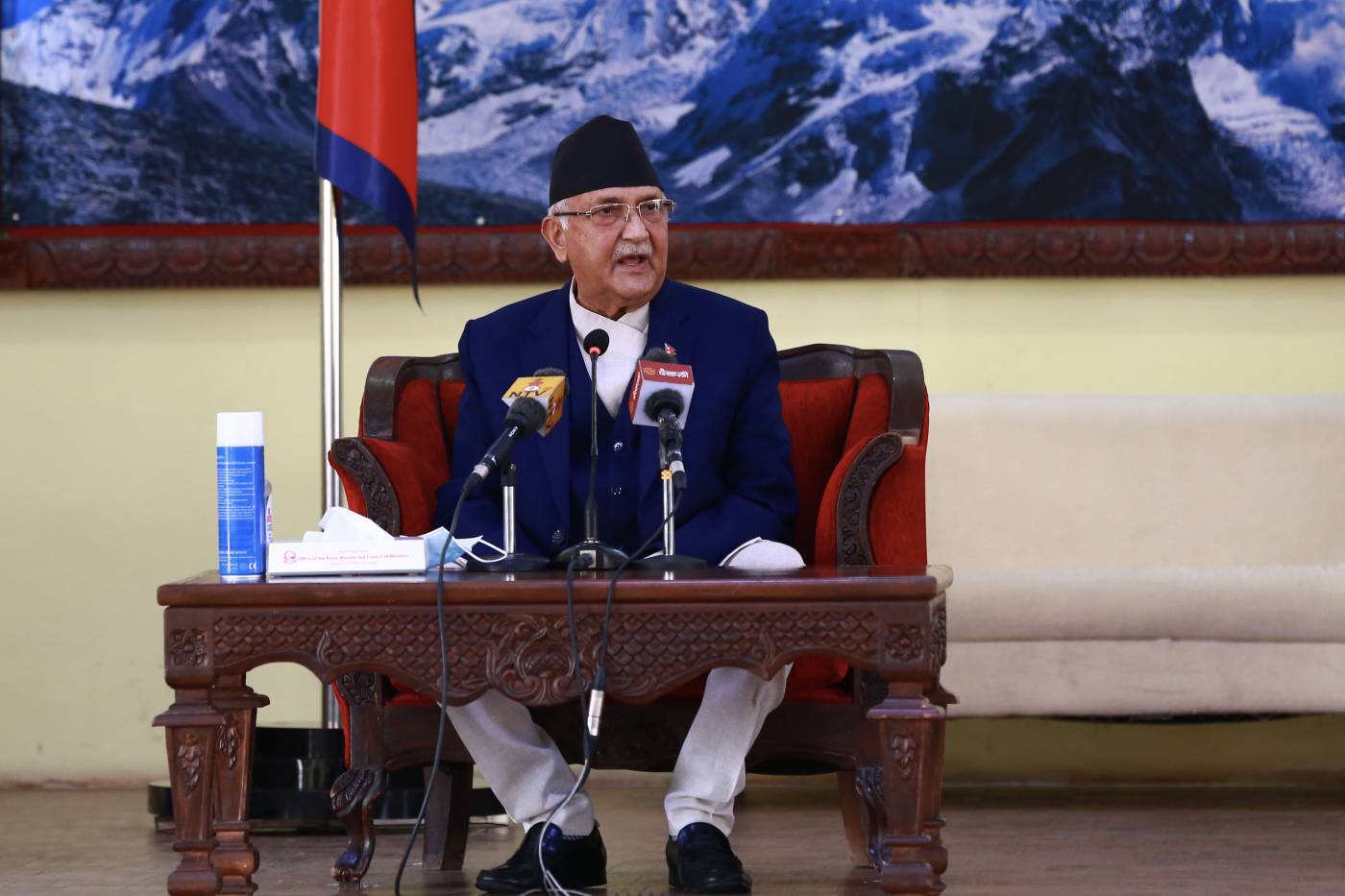 At a press meet organised at his official residence in Baluwatar today, PM Oli argued that the national consensus government could be formed to tackle the COVID-19 pandemic.

He also shared that he has opened the way to form a new government. PM said that he had made telephone calls to Nepali Congress president Sher Bahadur Deuba and CPN (Maoist Centre) chair Pushpa Kamal Dahal ‘Prachanda’ for consensus government.

Saying the constitution has not mentioned the provision that Prime Minister should resign from his post before going in new process, he clarified that it is enough to raise up one’s hands by giving option to others.

“I want to talk about consensus. But they are turning to opposite directions. Friends are pursuing me. I have asked them for option but they are not giving any option. It will not do any harm to the country if the country went for election and they failed to give any option. It is also a constitutional process. The country would get fresh mandate of the people from fair election,” added PM Oli.

He argued that attempts were made by some faction of the CPN (UML) to topple down government led by own party in an undemocratic way and to form new government under leadership of opposition party.

He said, “It is suitable in constitutional and political manner to pave the way rather than going for trust motion again. I will welcome if new government is formed. There is support of CPN (UML) to the new government.”

“I am responsible for the recommendation I have made before the President for calling for the formation of a new government. Let’s not put any blame on the President over this matter. The Supreme Court is the body for interpreting the constitution,’’ he said responding to journalists’ queries.

Responding to a query about the intra-party feud in the CPN (UML), he claimed that it would be no problem for taking the party back to May 16, 2018 if there was ‘no floor crossing’ and an insult to the parliamentary system.

Activities of indiscipline within the party contributed to fueling the intra-party issues, he said. As the party chair claimed, politically the unification remains at it is, but legally it has reached back to the period of unification as the court denied recognising the party in the name of the party (Nepal Communist Party) which was already existed.

“Friends were unwilling to reach the Election Commission seeking a new name to the party and we had to agree on the CPN (UML).” As he said, issues with Madhav Kumar Nepal and other dissenting leaders could be managed through dialogues if the there is no activity of indiscipline onward. “Otherwise, the deception the party suffered in the National Assembly by-election will be taken note of.”

In his response about the effectiveness of the COVID-19 control efforts, PM Oli said high-level talks are underway with neighboring India and China and the US, UK and other countries to bring additional doses of vaccines. If necessary, election could be held even amidst the pandemic by applying safety protocols which has been already practiced in many nations including the US.