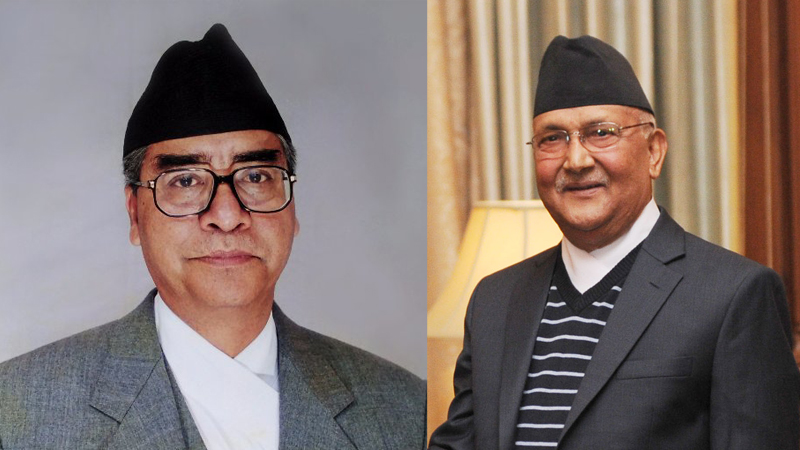 Ruling party chair Oli has presented his claim for new prime minister with support from 153 members of the House of Representatives (HoR) while Deuba presented the claim for the country’s highest executive position with the signatures of 149 HoR members.

Incumbent Prime Minster Oli has claimed for the prime ministerial berth as per the Article 76(5) of the Nepal Constitution with support from 153 HoR members including 121 of UML and 32 of Janata Samajwadi Party (JSP), his chief advisor Bishnu Rimal informed. A letter of claim presented to this effect has been signed by Chairperson Mahantha Thakur and parliamentary party leader Rajendra Mahato on behalf of JSP and UML chair and parliamentary party leader Oli.

On the other, Deuba registered his letter of claim with the signatures of 149 HoR members including 61 of NC, 49 of CPN (Maoist Center), 26 of CPN (UML) Madhav Nepal Group, 12 of Janata Samajwadi Party and one of Rastriya Janamorcha Nepal, informed NC chief whip Bal Krishna Khand.

Deuba registered his claim for the new prime minster at the Office of the President today on behalf of the opposition alliance as per the Article 76 (5) of the Constitution. The HoR has a total of 272 members.

It may be noted that President Bidya Devi Bhandari had given a timeline up to 5.00 pm this evening for the formation of a new government as per the Article 76 (5) of the Constitution on the basis of the cabinet decision that there was no strong political base for the incumbent government to gain vote of trust as well as the urge of PM Oli.