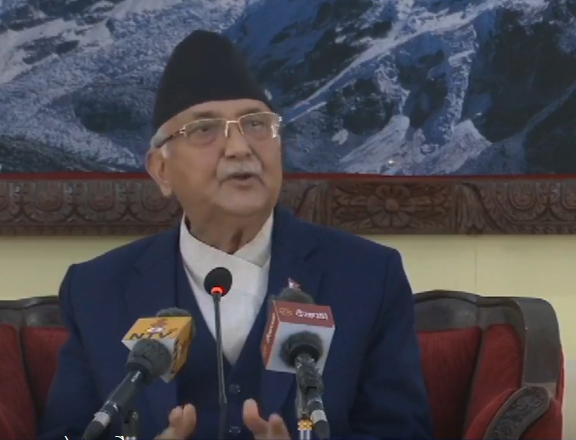 Kathmandu, May 22: Prime Minister KP Sharma Oli has said that efforts against the norms, values, discipline and ethics of democracy have fuelled to weaken the movement.

Saying that some people at present were effortful to belittle the achievements made in the country, the PM argued that the defectors exist anytime and anywhere

Rayamajhi was jailed for 13 years in course of Barre movement.

On the occasion, Oli said that the sufferings and woes of the ancestors should not be discarded.

PM Oli recalled Rayamajhi for being a sincere and dedicated to the country and country people who kindled light for others. PM Oli stated that Rayamajhi was studious during his jail time adding that he received treasure of knowledge while being released from the jail.

The memoir is rich in the use of literary image, symbol and metaphor, the PM said. Prime Minister Oli commented that the essays compiled in the book are the reflection of jail life and the then social and political movements.

“Spending a long period of life in jail was a struggle in itself as honest and devoted leaders and cadres do not choose easy way to come out of the jail. On another note, PM Oli argued that some leaders were not showing respect to the President in their use of language.

Commenting the book Foreign Minister Pradeep Gyawali said that the struggle of the ancestors and past generation could not be forgotten.  He remembered that he had mutual attachment with the Rayamajhi family while he was serving as the party In-charge in 2043 BS in Arghakhanchi.

Secretary of the Buddhi Bahadur Raymajhi Memorial Foundation and Buddhi’s wife Bijula Raymajhi expressed commitment to follow the parth of her husband.

Also present on the occasion were, Tourism Minister Bhanubhakta Dhakal and  Lumbini Province Chief Minister Shankar Pokharel among others.