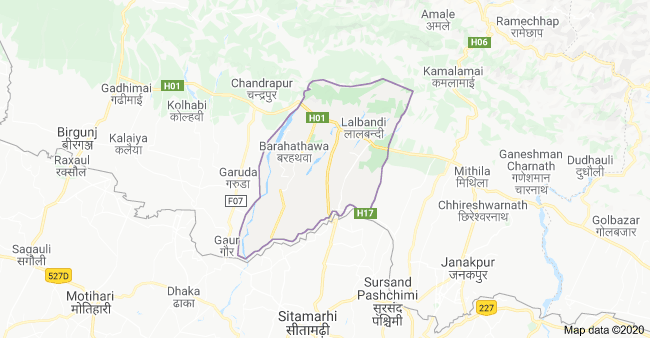 Sarlahi, May 24: Timber smugglers and poachers are spreading their tentacles in Sarlahi taking advantage of the prohibitory order against COVID-19 pandemic.

People residing near forest areas in Lalbandi, Ishwarpur, Haripurwa and Barthawa say they notice the increased movements of people in the forest areas for smuggling and poaching. The district has first issued the prohibitory order on May 8 and it has been extended till today.

Forests along the border of Sarlahi and Mahottari districts are habitats for several kinds of wildlife such as wild boar, blue bull, deer, porcupine, feral chicken and pheasant. Locals said poaching of these animals and birds has increased lately. In the evening of May 13, police arrested a person red-handed while skinning a blue bull after killing the animal.

Police also confiscated a motorcycle bearing the number of Province 2 02032 Pa 2522 and another motorcycle with an Indian number plate, three loaded guns, and gun powder which were allegedly belonged to poachers from Sagarnath Forest area at Ishwarpur municipality-4.

During the confiscation process, poachers fired three rounds in the air and in response, police exchanged two rounds blank fire, Area Police Office, Keshargunj, Bayalbas police chief Janak Raj Dhungana said. However the security squad succeeded in detaining one Rana Bahadur Gole of Ishwarpur municipality-4 and he is under investigation, said Superintendent of Police Santosh Singh Rathaur. Others three in his gang have been absconding and police are searching for them.

Locals are afraid following the increased movements of alleged poachers and timber smugglers. As they said, they are warned of physical assault if they report anything about them to the police and cooperate with the latter.

Division Forest Office’s Madhav Prasad Dev admitted that poaching and wood smuggling activities were up with the implementation of the prohibitory order and forest security patrolling were beefed up to crack down on the forest-based illegal activities.