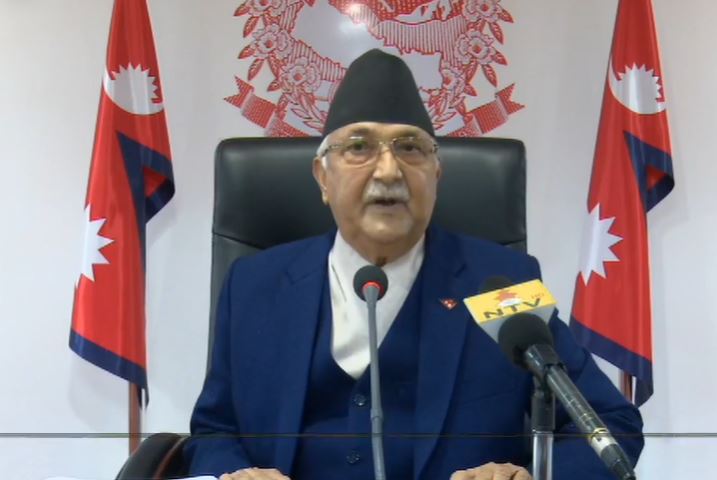 Kathmandu, May 28: Prime Minister KP Sharma Oli has said that the mid-term election was declared as per the constitutional process when the incumbent House of Representatives (HoR) did not provide vote of trust and deliver an alternative government.

In his address to the country a day before the presentation of the budget for the upcoming fiscal year, PM Oli claimed he had proposed either to give vote of trust to this government or deliver an alternative government but the HoR did not yield any results.

After PM Oli failed to get vote of trust in the HoR on last May 10, he again became the PM as per the Article 76 (3) of the Constitution in the capacity of the leaders of the largest party in the parliament. PM Oli further clarified that he had opened avenue for the formation of another government as per the Article 76 (5) for not seeing reliable base to get vote of confidence again as the government was required to obtain vote of confidence within a month.

It may be noted that President Bidya Devi Bhandari had called for the formation a new government on May 20. The country was pushed to mid-term election as the claims for a new government by both the sides (his and opposition party leader Sher Bahadur Deuba) entered into a dispute, he added.

The HoR election has been declared for coming November 12 and 19. “I had an institutional backup of UML and JSP but there emerged some incidents which were utterly against multiparty democracy and parliamentary system. At a time when there was the pressing need of checking pandemic and introducing new policy and programme and budget the situation emerged in a way that the government could not take its form”, said PM Oli, also the UML chair.

This is the act to create frustration among the people towards multiparty governance systems and is also a continuity of attack of ultra-rightist and ultra-leftist forces on democratic republic, PM Oli went on saying.

Ignoring party whip in multiparty system is not acceptable, he said, adding the election was declared by adhering all the process of the apex court verdict delivered on February 23.

Terming a move for election a regressive act is against people’s sovereignty, he pledged to conduct election in a free and fair manner.

He expressed the hope that people’s temporary frustration would end up following the elections.

Maintaining that he did his best efforts until last hours for party unity, he claimed that party general convention would have been held till now had the party been remained united.

In another context, he said that budget for the next fiscal year would be brought based on the policy of prosperity along with social justice.

Stating that all state mechanisms have been mobilised to prevent and control Covid-19, he thanked all neighbouring and friendly nations for their supports to combat the deadly virus. An emergency would be imposed as per the need and vaccine arrangements would be made for all people, he pledged to manage free treatment for infected people.